This magnificent natural monument is visible from practically every part of the Torremolinos coastline. The huge expanse occupied by the Punta or Morro forms the halfway point of the town, dividing it into two halves and forming a natural boundary between its two best-known beaches: Carihuela and Bajondillo. Previously, it was a natural barrier between the two areas but an extension of the promenade now makes it possible to walk along the shoreline and enjoy an unbeatable stroll next to the Mediterranean.

Taking advantage of the travertine ledge, a gun battery was placed here in the 18th century. Later, the British soldier George Langworthy acquired and converted it into accommodation at the end of the 19th and beginning of the 20th century, it becoming one of the first hotels on the Costa del Sol, under the name of Hotel Santa Clara.

It was on the Punta de Torremolinos that Gala Dalí, companion and muse of the brilliant Spanish painter, featured in Spain’s first instance of topless bathing, an episode captured in photograph. 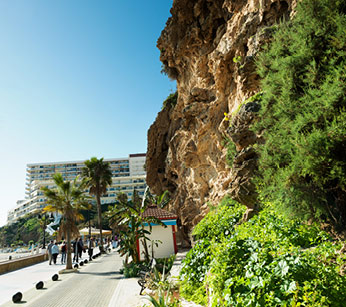